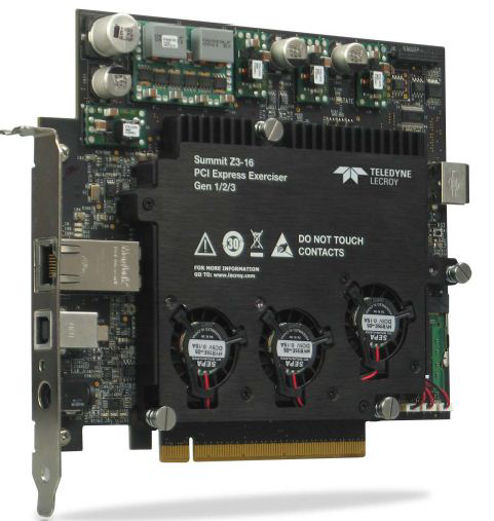 The Summit Z3-16 builds on the extensive programming and verification test libraries established for Teledyne LeCroy's PETrainer? and Summit Z2-16 PCI Express Exercisers, and provides the user a complete suite of test capability, including the ability to test products to the new PCI Express 3.0 specification.

The Summit Z3-16 is a critical test and verification tool intended to assist engineers in developing and improving the reliability of their systems. The Summit Z3-16 can emulate PCI Express root complexes or device endpoints, allowing new designs to be tested against known standards. As Teledyne LeCroy's fourth generation of PCI Express generators, the Summit Z3-16 leverages years of experience in providing advanced protocol analysis test tools for emerging markets.

The powerful scripting language allows for the creation of Transaction Layer Packets (TLPs) and Data Link Layer Packets (DLLPs) at Gen3 data rates of 8 GT/s. ACK's or NAK's can be generated under user control. Packet fields not explicitly specified by the user are generated automatically (such as CRCs). The onfiguration space can be emulated for any device including endpoints, bridges and switches. Support for Gen1 (2.5 GT/s) and Gen2 (5 GT/s) data rates allows the Summit Z3-16 to produce test cases that test the device's abi